Category: Ministry of Youth and Sports 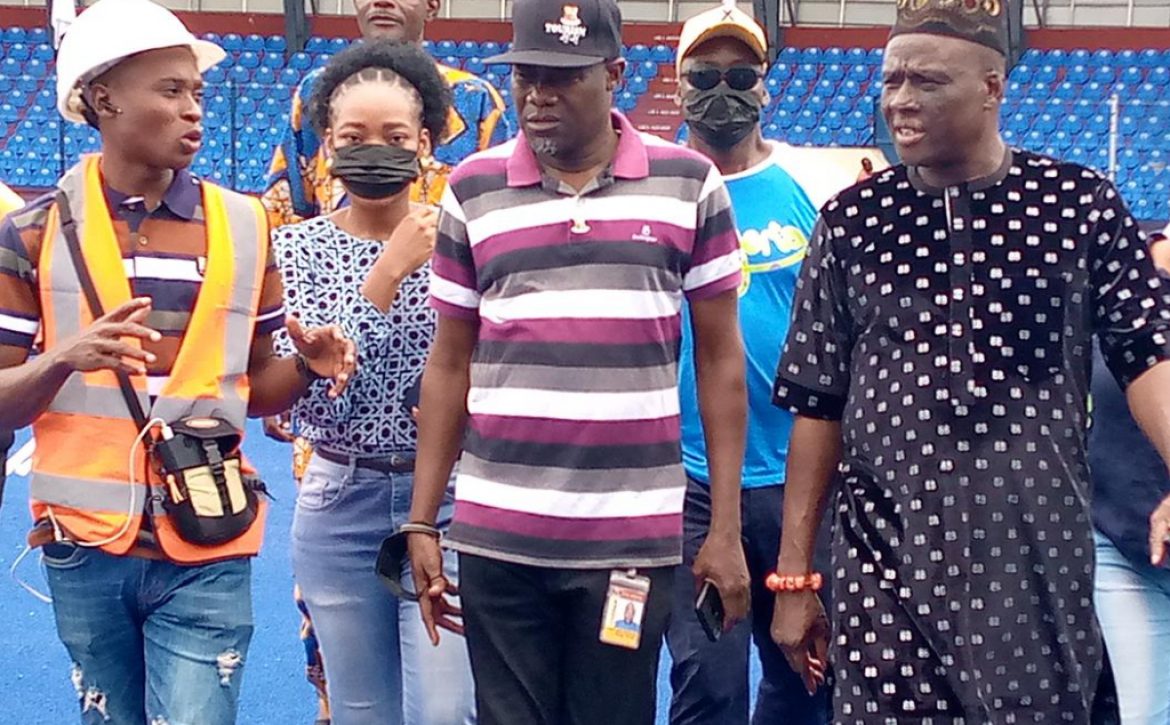 The re-modelled Adamasingba stadium in Ibadan has been named to be the top revenue-generating source for Oyo State Government and means of generating employment opportunities for the people of the State.

The Special Adviser to Governor Seyi Makinde on Culture and Tourism, Hon. Ademola Ige stated this on Monday, while on a tour of the facilities at the stadium alongside the Vice-Chairman, Oyo State Board of Tourism, Alhaji Abass Oloko, some members of the Nigerian Tourism Development Corporation (NTDC), led by the State Director, Mr. Dotun Opatola, Erelu Funmi Rotiba of the National Association of Nigerian Travel Agencies (Western zone), as well as the Federation of Tourism Association of Nigeria, among others.

The project will be commissioned by Governor Seyi Makinde on Wednesday, 1st September, 2021, with special matches, meant to test-run the facilities in the stadium.

Ige said sport tourism would take over from other sources of revenue generation in the State, citing the examples of notable cities around the world with standard stadia, through which they get funds for other public projects.

“This is part of the efforts of Governor Seyi Makinde to make Oyo State a tourists’ destination, so this sport tourism project is one of other areas of tourism locations in eco-tourism, natural tourism and food tourism that are well noted around the world, this stadium is situated within the heart of the capital of the State and can be easily located.

“For the past 30 years that the Lekan Salami Sports Complex has been in existence, there has been no massive turn-around or refurbishment of the stadium like we are witnessing today under the present administration and that is why we are here with the major stakeholders in the sector to look at the areas that are important in the area of tourism and promote same to the world.

“”Prior to the commencement of this project, the Governor said categorically that he has keen interest to develop tourism, to make tourism another major source of income for the State, here we are, he promised and has just delivered on his promise, this is where the State will generate better revenue to service its programmes and public facility development projects, the Stadium is going to be the one to be laying the golden eggs in revenue generation henceforth.”

The Chairman, Oyo State Sports Council, Hon. Gbenga Adewusi, in his reaction, said the re-modelling project will have a major impact on the history of Oyo State, as he noted that future generations of the State indigenes would remember the present administration for good.

He disclosed to newsmen that already, many corporate organizations and companies like Nigerian Breweries and some sport marketers have beseeched the council to request for sponsorship of programmes, events and spaces in the Stadium.

According to the representatives of National Association of Nigerian Travel Agencies (NANTA), Federation of Tourism Association of Nigeria (FTAN) and Nigerian Tourism Development Corporation (NTDC), major facilities like museum, V.I.P lounge, statues of past sporting heroes from the State will attract tourists that will pay for controlled access to the stadium facilities.

They alluded to the facilities found at international sporting facilities like the Nou Camp in Barcelona, Emirate Stadium and the popular Brazil stadium among others as major sources of income generation for the countries where they are situated.

The Commissioner for Youths and Sports, Mr. Seun Fakorede has described sport activities as elements necessary for national development because it re-energizes the body and END_OF_DOCUMENT_TOKEN_TO_BE_REPLACED

As part of the activities lined up for the commemoration of the year 2019 Independence day celebration, Oyo State Government through the Ministry of Youths and Sports, in collaboration with the State Ministry of Education Science and Technology has organized a one day essay competition for primary and secondary school pupils across the state tagged “NIGERIA AND THE CHALLENGES OF INSECURITY IN THE 21ST CENTURY” on Thursday in Ibadan.

Others were Queen of Apostle, Ibadan, Igboora High School, Igbo-Ora, Corner Stone Model College, and The Pacesetter Comprehensive College, Oluyole, Ibadan among others.

In his welcome address the Honorable Commissioner for Youths and Sports Honorable Seun Fakorede, commended the students for their impressive performance and urged them to always give their best during academic exercises, as according to him, the future held better opportunity for them.

The Commissioner further implored the students to strive hard in order to attain greater heights in future while appreciating the teachers who he said had invested so much in their future.

“It is a thing of joy that we can still have pupils from our public schools performing so excellently at external academic exercise like this, it shows that the investment of this current administration on education is yielding good result.

“I want to urge you to keep up the good work our teachers are helping you to do and put all your efforts at achieving excellence in all you do, look at me as a model, it shows that the future really belongs to we young ones.”

The Commissioner for Education Professor Kehinde Shangodoyin, represented by the deputy director at the Ministry of Education, Science and Technology, Mrs Abiodun Bisi, advised the students to as much as possible, imbibe the sense of love for one another as well as humanity because God created each one being to impact positively on humanity.

As part of the present administration’s efforts in Oyo State towards youth welfarism and development, the State END_OF_DOCUMENT_TOKEN_TO_BE_REPLACED